Check the photos of the experience on our social accounts! 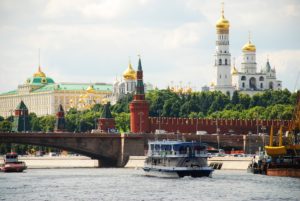 After the fall of the Soviet Union, and a period of deep economic and cultural crisis, the Russian  Federation has regained its leading role in the international arena. Today Moscow is, along with Washington and Beijing, one of the three centers of world power.

Historically, Moscow has always been a pole of power centralization, as it was the capital of the  USSR, the protagonist of the Cold War. Moscow kept its status of capital of the biggest country of the world since 1991.

Several elements define the influence of Russia in world politics: the permanent seat in the UN  Security Council, the possession of the world biggest nuclear arsenal, its military industry and  arms market and the leading position in oil and gas production make Moscow the best place  for a Study Mission addressed to students who want to discover more about Europe’s ambivalent neighbor.

Moscow is also the biggest city of Europe and, with over 15mln inhabitants, it is characterized  by a galvanizing dynamism. Restored Soviet monuments dominate the cityscape, alongside  futuristic skyscrapers, which represent the revitalization of Russian power in Putin era.

Moscow is fierce of its cultural identity, which is nor European nor precisely Russian, but a mix  coming from different regions of the former Soviet Union, which makes Moscow unique.

The WiP – Study Mission project will help students to understand the mechanisms of power of the  Russian economic and political leadership and will orient participants to elaborate analysis on  controversial topics: transatlantic relations with the US, Russian influence in foreign electoral  processes and its role in war-torn countries.

The stay in Moscow will also be a unique opportunity to interact with Russia’s ruling class.

By the end of the program, students will have gained a deeper understanding of Europe’s most  influential neighbor.

The goal of the project is to allow participants to open their minds and leave the pre-existing  narrative behind. We will try to understand what obstacles hinder the cooperation with the EU and  what are the future prospects, in light of the recent isolationist and populist tendencies, that seem  to have taken hold all over the world, from the United States to Europe and look at Russia as the  main political partner.

Participants will also have the opportunity to discover in practice how dialogue and collaboration  constitute always an asset: the extraordinary economic and commercial partnership between Russia  and the EU, despite the ongoing sanctions regime, make this relationship inevitable and – you will realize – even indispensable.

Participants will also have the opportunity to discover in parctice how dialogue and collaboration constitute always an asset: the extraordinary economic and commercial partnership between Russia and EU, despite the ongoing sanctions regime, make this relationship inevitable and – you will realize – even indispensable.

The structure of the WiP – Study Mission is divided into three parts:

Transport: Due to the historical value and efficiency of Moscow’s metro, it will be the  preferred mean of transport from one meeting to another. In special cases,  transfers by bus will be organized by EWEI.

To participate to the WiP – Study Mission, candidates must successfully pass a selection interview. Selection criteria will include the candidate’s motivation to participate in the program, their interest in international relations and a good level of English.

For additional information about Study Mission Moscow and how to participate, contact: